Last page of my sketchbook...
for the last day of the year

It was just a coincidence, but some days ago I realized that I had only a page left of my drawing diary, and it was only few days for this year to finish. Obviously, I couldn't resist the symbology of it, and went out today, last day of the year, to honor this 2015 full of drawings.
A couple of weeks ago, a friend recommended me to go to Mourex, which I didn't know, so off I went... The village is really nice, and really small, I'd almost say it has a single road and one intersection. But as tiny as it is, there were many charming views, although today I was kind of limited because of the rain and, ideally, I wanted to pick a spot where I could park and draw from the car. After many turns (I don't think I've gone over and over on the same road that much ever before), I decided to take the risk and draw outside. It went OK, it just started raining towards the end, so I packed my stuff and left... but the sketch was already done :) I'm still getting used to this new watercolor box, but today it was easier than the previous day in Divonne, and we'll have time to get to know each other better in 2016 :) 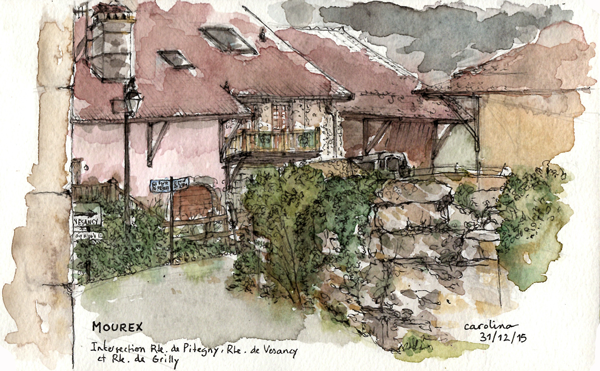 Posted by Carolina Deluca at 2:34 PM No comments:

This morning I went with my father to the market in Divonne, he to walk around, and myself to draw and use for the first time the new watercolor box Father Christmas brought me. I noticed its pigments are much more concentrated, and so with a tiny bit I already get very bright and intense colors. The color palette is also a bit different, but in the end things worked out nicely, and I got my sketch of the market done :)

Now, time to warm up a bit again, I get so cold when drawing in the shadow! 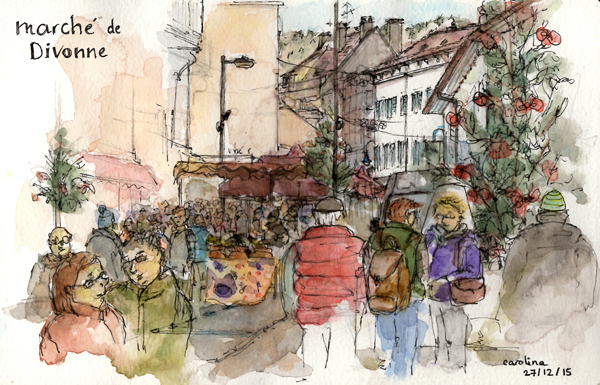 Posted by Carolina Deluca at 3:16 PM No comments: 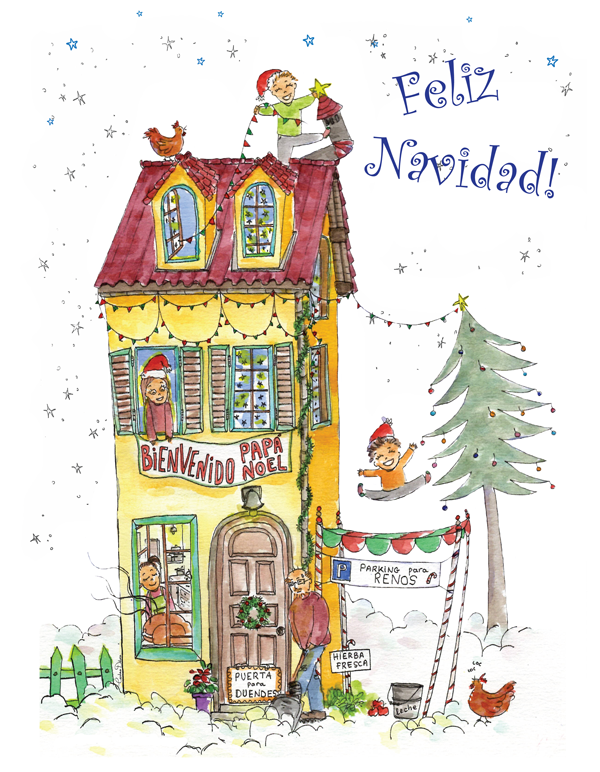 Posted by Carolina Deluca at 4:20 PM No comments:

Vesancy, a village to get lost...

This morning I went to Vesancy, a little village in the Jura, between Gex and Divonne. I had never been there, but when I was leaving home this morning, a friend told me that the town was beautiful, and recommended me to go. I had no clear plan to draw, but just wandering around a bit until I found something, so off I went!

Despite the fog that had descended this morning, the sky in Vesancy was bright and blue, and the day quite warm for being winter. And I am thankful to my friend because indeed the village is gorgeous, undamaged, and well conserved. The town seems to be built around the château de Gex and the church, and from the cemetery where I was drawing, the houses seem to crow together leaving no space for anything else.

One other day I will come back, Vesancy, and get lost in your little streets and corners. I'm sure you have plenty to offer me! 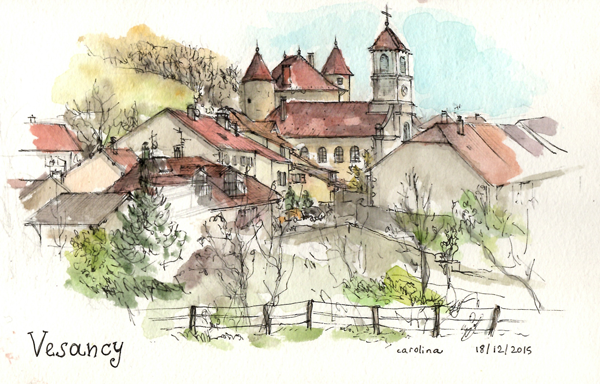 Posted by Carolina Deluca at 2:26 PM No comments:

Wednesday night I went to my weekly model drawing session in Ferney, and when I got there, the model asked me if I could drive her home, as she was with the car in the garage. She lived in Prévessin, and it was only a small detour for me on my way back home, so I took her with me. We arrived to Prevessin from Ferney and at some point she indicated me to turn left. It was dark, but I could see that in the middle of the whole residential area Prévessin has become, there was this small road that had remained almost intact, with its old houses and farms, and with its beautiful corners. So I decided that next time I would have a moment to go out, I would come back there.

Today I really didn't have much time, but it was so sunny I really had to profit, so I took my stuff and went out. The time was so short that for the first time I had to set an alarm to stop drawing and run to my car. Time can fly when I am drawing!! I chose a spot where I would get some sun, and drew this quiet and charming corner between Chemin de Magny and Chemin du Marais. Today, time was so short I didn't become cold at all :) 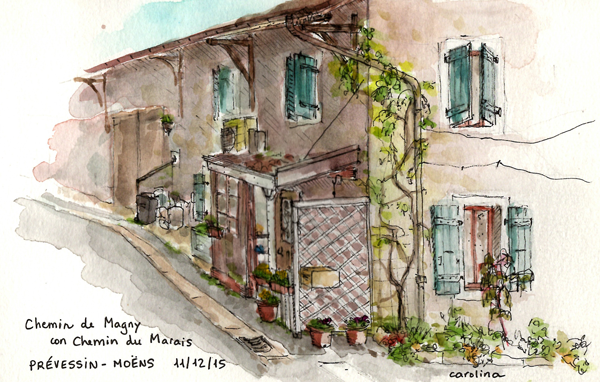 Posted by Carolina Deluca at 3:17 PM No comments:

Drawing in the fog

Today the day started sunny, but already in the morning the fog descended from the mountain, and ended up covering everything. In the afternoon, the fog was quite dense, and the ambient very humid and cold. I had a moment, so I went out. Also this time I brought my father with me, and we drove a bit before finding a spot that would convince me. It is sad, but as many beautiful and authentic places as there are around, many others have been turned into urbanizations, and even if they can be nice to live in, they've lost all of its character. Finally, we ended up in Mury, a very small village close to Echenevex, where houses and old farms still live together. As last time, at some point, my father stepped in, and this picture, together with my cold feet, is the result! :) 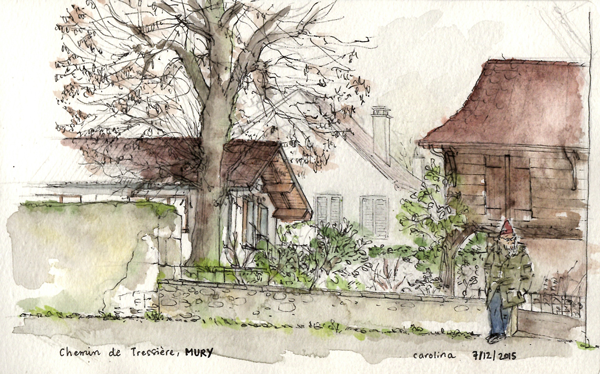 Posted by Carolina Deluca at 5:39 PM No comments:

Today my father brought me to his favorite place, so I would draw it for him, and gave me nice conversation while I was doing this sketch. This is a little road that goes from Chevry to Naz Dessous, called Route de la Source, and that continues high and almost to reach the source of the river L'Allondon. In fact, I found I have drawn it before, but from another location. It is funny since I didn't know the place, but I drive regularly through the road that cuts it high in the top, and just a detour right hand would have brought me here.

While drawing, at some moment my father stepped into the frame, so that's him over there, looking at the fields. Then, when I was finishing, I got to meet the people who live in one of the houses. They were passing by with their car and stopped, curious to see if their house was in my paper. I love when these unexpected conversations happen, and when people is happy to see and recognize their place.

I definitely had a very nice afternoon in this very beautiful sunny winter day. Now, time to warm up! 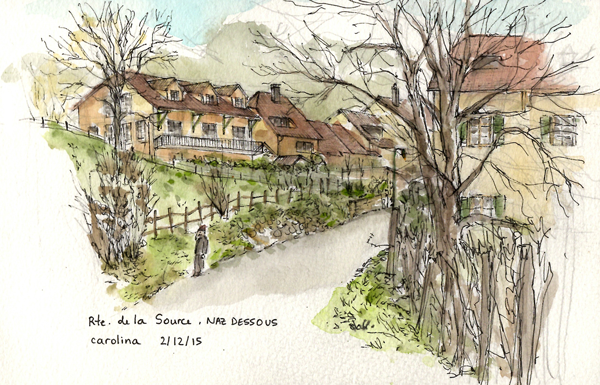 Posted by Carolina Deluca at 5:09 PM No comments:

Today, after a bit more than a week, I finally found a moment to go sketching. I had work to do, but I must say that the cold holds me back a bit as well and I find time to progress with other indoor projects. This morning I had to go to Chevry, so after that, I continued driving until I found this nice place in Véraz, a small village that belongs to the commune of Chevry. It is a small road with no exit called Chemin du Moulin, as there used to be a mill there. Since last time I posted a drawing, the snow that had fallen in the valley has melted down, but the grass is as green as ever, and the cold has backed up a bit. Although even 7 degrees is a bit low when one is without moving for a moment! 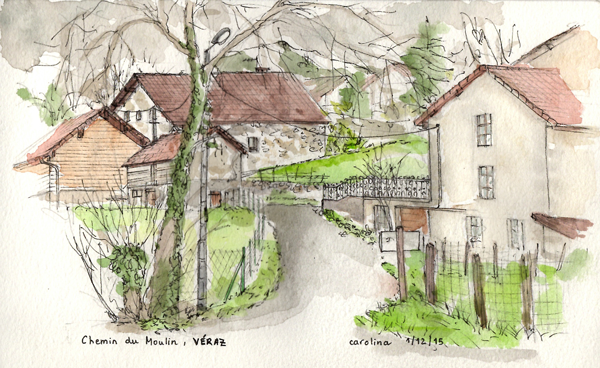 Posted by Carolina Deluca at 11:46 AM No comments: