Closer to that yellow field

Last Wednesday I wanted to sketch the yellow colza fields in Crozet, but I didn't dare to sit close to the route. This afternoon with my dad we went into the fields, so I could get a closer view, and I sat there for a while, adding layers of greens. Here in the picture the sketch seems pretty small, but in fact the larger size is about 50 cm, and it took me more than an hour to complete it.

It is so nice drawing in the Spring sun and surrounded by these gorgeous landscapes.

Click on the image to view it larger
Posted by Carolina Deluca at 5:30 PM No comments:

Thursday afternoon I always drive my daughter to her dancing class. It is not far, but far enough that makes it not worth to come back home during her lesson, so I always stay there. I usually bring a book, or some work, if I am working on a digital illustration. I never go out and draw during that time because it's been always dark and cold, and time is really short to look for a place and to draw and finish color in place. But today it wasn't dark, I'd been drawing in the morning too, working on a commission, and I was left with the will of going out again just for the fun of it. So I went.

I was lucky because I found a little path I didn't know about, that brought me near the center of the town. And right there, just walking a bit, there were several nice houses for me to draw! I had 30 minutes to choose the place, sketch and be back, so I just picked a sunny spot where I could put my stuff and did a very very quick sketch of one of the houses. And I was even there waiting for my daughter to come out 3 minutes before the class was over!

The other good thing is that I have houses left to paint for next time :) 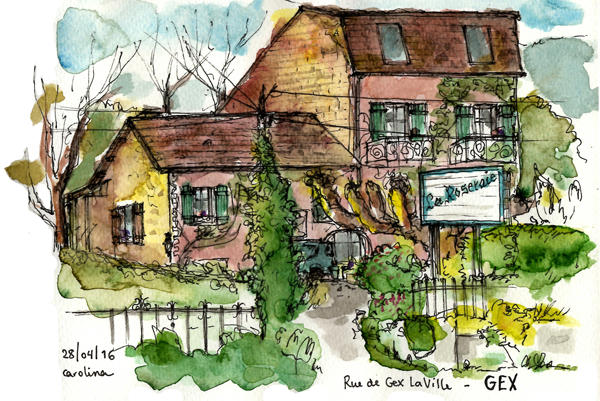 Posted by Carolina Deluca at 9:35 PM No comments:

It is true what it is said that, sometimes, while drawing, the pencil becomes alive and with its own will, and ideas evolve and take ways we didn't think in the first moment. I guess it is just that one can be so focused in something that thoughts come up almost unconsciously, aided by the images we have already drawn.

Little Panda (Pequeño Panda) was born in this way, during the illustration process of the wishes of a godmother to her baby godson. My pencil became alive and my drawing evolved to the figure of my little son and his doudou, his inseparable fluffy toy, a little panda bear. All at once I discovered that the Little Panda was the image of my boy, and that the little rag mouse was that of his panda bear, his friend, his solace, and maybe his secret confident...

Now Little Panda has life on his own, as a character, starring what it will be his first book. 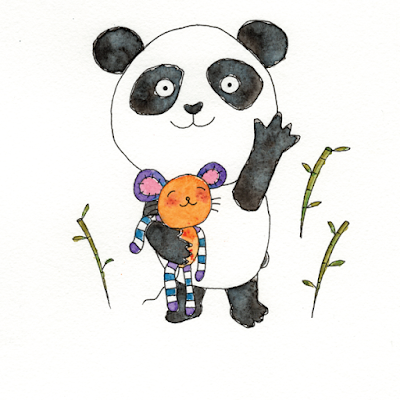 I have previously described a bit what is involved during the creative process. In fact, you might be surprised to hear that it starts as soon as the project has green light. From that moment and until I have a more or less clear picture in my head, I think about it last thing before getting asleep, and first thing in the morning. And intermittently during the day. When the idea starts to form I just get very anxious to draw it, but I am already more relaxed inside.

Before starting thinking, or before starting drawing, the first thing is to decide the format. Yes, the format is very important. Because we tend to think only the content matters, but not, the way we place it, the "white" around it, is also a very important part of the composition. Once this is settled, I start to sketch.

When I started sketching, I already knew I would use the relationship between a kid and his toy to illustrate the different concepts I had been given. I also knew I didn't want the kid to be a human kid, but an animal. But I hadn't still decided exactly which animal. I also knew the doudou would be an animal too, but didn't know what yet. I had three or four choices for them, and I started sketching. After two or three sketches, Little Panda popped up as the main character.

When I was satisfied with it, I got to his toy. What interested me is that the toy would have features that would immediately give the sense of movement of a rag doll. That's why I made it with long legs and long arms. Long legs and long arms can just hang or have some expression. Then I made strips so that I could color it a bit more, and provide some contrast with the panda's black and white colors. And well, I chose a mouse because it seemed to me a panda and a mouse were a good match :)

I did the sketches for all the concepts, carefully working on both the body language and the expressions of the character. Because a good sketch is crucial, as it represents 90% of the total work. 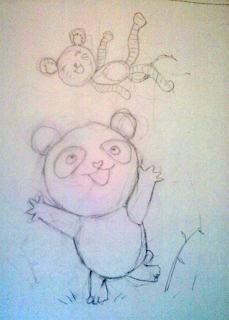 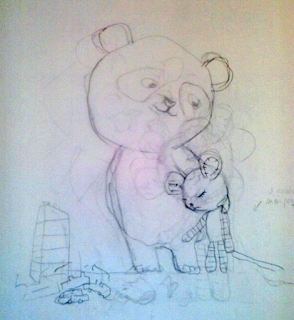 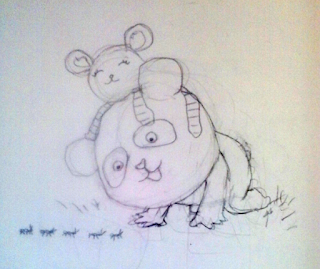 Some of Little Panda sketches


Only when the sketches were given green light, I started the final artwork.

First of all I prepared the paper, marking the format I was working with. In this case, all illustrations were to nicely fit in a 15x15 cm square. Then, I just drew everything again very very carefully, trying to always keep my paper clean, making sure to always keep the same proportions between the panda and the mouse, between the panda head and his body, between the mouse head and his body and legs, and all this sort of things. I carefully worked on the body and face expressions, first using a soft pencil for all drawings in parallel, and later on, when happy, using a waterproof marker to finalize the lines. 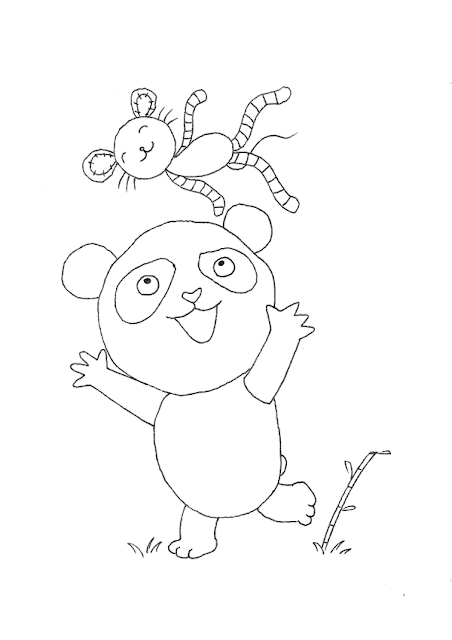 One of the Little Panda final illustrations, before putting color in

Time for the final final step: coloring.
I scanned everything, just for safety, and printed a copy of the image above, for coloring tests. I chose this one because the bodies of both the panda and the mouse are clear and complete. These illustrations were to be done with watercolors, and we cannot remove them once put in, so testing colors is a good thing to do. For the black parts of the panda I used black and indigo, letting the watercolors mix in in the paper. The mouse was to be orange with touches of blue and violet. The first test came out nicely, so I went back to the originals to color them.

And voilà, this is the final result!
Little Panda and his mouse are very good friends, and they hope will share many adventures in the future. 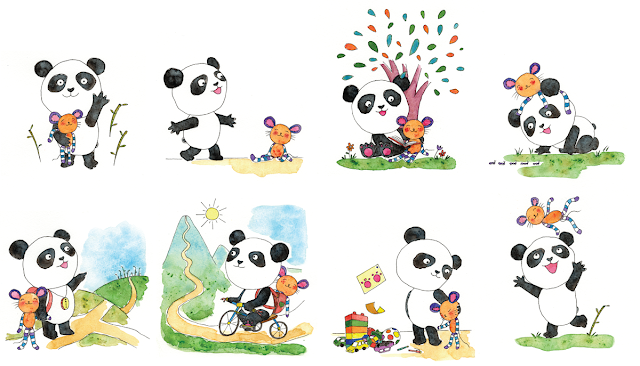 
Posted by Carolina Deluca at 8:13 PM No comments:

After two intense weeks of school holidays, it felt I needed a bit of time out.
I didn't stay in my pyjamas all day, but I finished all immediate work, prepared this afternoon drawing classes, and I had this bit of time out drawing just for fun. And it was as great as it sounds :) 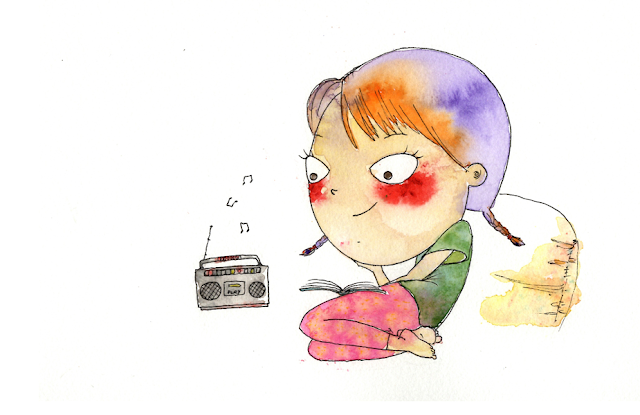 Posted by Carolina Deluca at 4:27 PM No comments:

Everything is green in the fields around where I live. Only in the mountain spring is still making its way to the top, and some greys and browns from the branches that have no leaves yet are mixed with the bright and intense green of the leaves that just came out. It is beautiful. Fields are full of dandelions and other flowers, and the colza fields are just in flower too.

This afternoon I had a little moment, so I went out to quickly capture this explosion of green. I wanted to get closer to the colza field at the bottom, but I was afraid of sitting too close to the route, so I had to leave the field beyond the farm. This is a view of Chemin des Noyers from Chemin des Hivouettes, right before the poney club in Crozet.

Click on the image to view it larger
Posted by Carolina Deluca at 4:26 PM No comments:

Drawing from the sofa

Today I really wanted to go out to sketch, as with the school holidays starting this Monday, and then some work I have to do, it really felt like the last opportunity in a while. But for different reasons I had to stay home. So in the end, after realising it was now or never, I just drew from the sofa. And yes, it is way funnier to draw your own mess than actually tidying it up!

Click on the image to view it larger
Posted by Carolina Deluca at 5:37 PM No comments:

Raining, inside and outside

When I am in between projects I always take a morning, an afternoon, or a full day for myself before starting with the following one. It is like when you have just finished a book, you have the next one to read waiting on your bed table, but you cannot start one straight after the other, so you switch off the light instead.

Today is one of these days for me, when I usually just take my stuff and go out to sketch. But today we have a steady and constant April rain, so I decided not to go. After a while I rethought it and decided that it didn't matter the rain, that I'd go out... and then I didn't have time to do it anymore... so I just let it go, and drew what I felt. Inside and out. 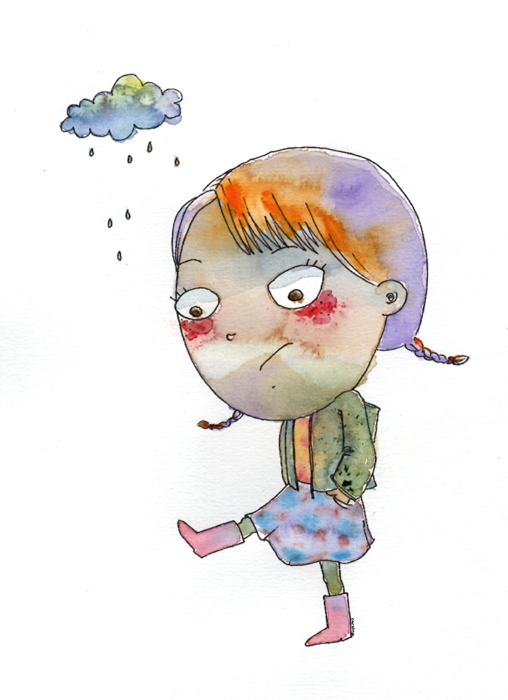 Posted by Carolina Deluca at 4:51 PM No comments: