It is always more difficult to show negative feelings that good and happy ones. We all have our Facebook walls full of happy pictures, happy messages, always having fun, always smiling. We only share negative things and show our anger when it is caused by something that does not affect us deep inside, and sometimes because it just makes us seem better. But then little of us do something real about it other than a rant. We live projecting this fake image of happiness and a perfect life, but in reality, our lives are complex, plenty of ups and downs, and full of contradictions.

I guess this is why it is more difficult for me to share my last illustration. It expresses my sadness about something that is not me, but it came from inside, so I guess that makes it very personal.

This is about a dying sea, being eaten by ourselves, by our cities, our garbage, and our profound egoism. To me, this inspires a very deep sadness, and as much as it costs me sharing my feelings, I do it with the hope you will get caught as well by it. Maybe later things can start to change.

(Click to see the image larger)
Posted by Carolina Deluca at 9:42 PM No comments:

Today I had to go to Villeneuve, I had time, and it was a warm and sunny Spring afternoon, so, what else could I do other than taking my sketch set with me? :)

For the first time in a while, today, my feet didn't go freezing while sketching, even though it took me a while to complete this panoramic view. A couple of bees came to say hello, birds were singing the whole time, and I could even sketch a couple of bushes with small yellow flowers. Oh yes, Spring is already here!

Click on the image to see it larger
Posted by Carolina Deluca at 5:52 PM No comments:

Break and back in Vesancy

Yesterday it was snowing, and today Spring came back again. In fact, it's been like this during this whole winter, but I just said it the other way around (one day it was warm and the day after winter was back again).

This week is a busy one for me, and I am quite tired, but some time ago I learned that the only way to not be a zombie during the whole day is to just keep drawing. My mom is visiting me, so I thought it would be a nice occasion to go back to Vesancy, get lost in its small streets, and sit to draw for a little bit. So off we went. My mom loved the village, and kept walking around while I stopped in the little Rue de la Fruitière to sketch a corner I had seen at the beginning of our tour. 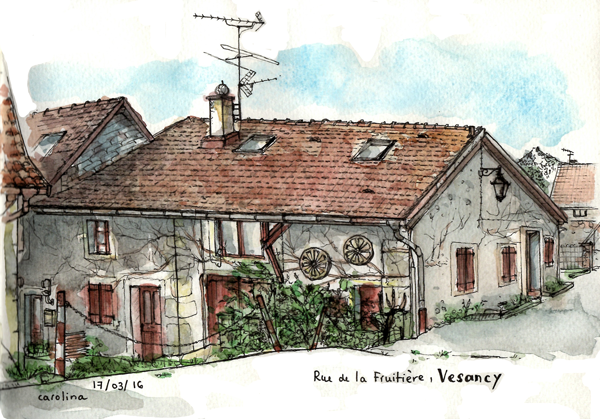 And she also took some pictures of me... 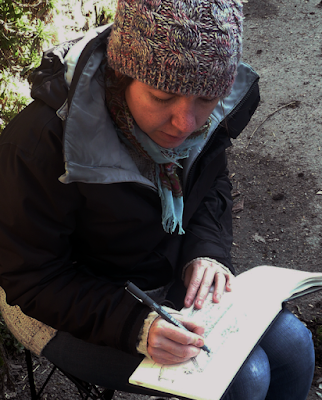 Posted by Carolina Deluca at 2:56 PM No comments:

Going out... after a month!

This morning I went out to draw, after almost a month and a half!

I've been very busy, and although I missed my sketching promenades a few times, I was so distracted with work that days kept going and going, a month passed by, and I almost didn't realise. But yesterday, with the biggest of my ongoing work projects almost finished, first came a very intense tiredness (I was literally falling asleep every time I sat down), and today, after having slept, the realisation of how long it was I didn't get out to sketch.

This morning I had a bit more than an hour, so I took my stuff and the car and started looking for THE place to draw. The problem about having been so long without my sketching routine, is that, without realising, I was much more exigent choosing the spot, probably because it was the first time after what I felt it was a long time. So I spent like more than half an hour doing turns, parking, getting down, walking a bit, saying to myself "no, this is not THE place", getting in the car again, driving for a while, stopping, getting down, and so on. After a while I realised that if I continued like this I would not have any time left to sketch, and I just stayed where I was, in Echenevex, in a little square facing a corner in Rue du Bourg. Of course, after that many turns, I couldn't finish but a house before I had to leave, but OK, I plan to go out sketching more often from now own :) 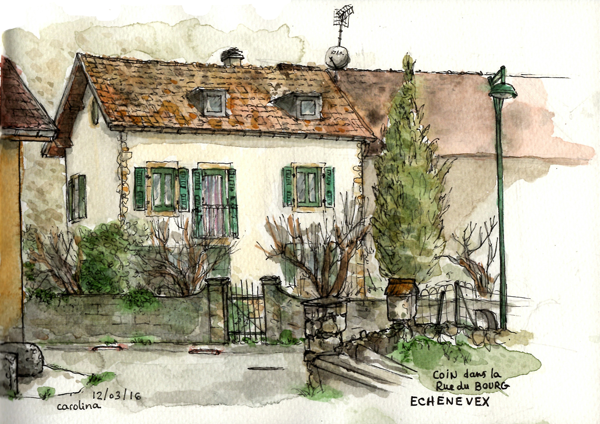 Posted by Carolina Deluca at 2:40 PM No comments:

Poster for a Scientific Conference
2016 edition

Last year I made a poster for a scientific conference that took place in Amsterdam, do you remember that poster?
It was a conference about tracking detector mechanics, and I explained a bit about the idea behind the illustration and the poster design here. This year I was contacted again to make the poster for the 2016 edition of the conference, so this is what this entry is about!

These conferences usually take place every year, and usually they change venue every time. For this edition, the meeting will take place in the German city of Bonn. I have never been in Bonn so, before starting with the real work, it took me a bit of documenting myself to get a feeling of the place. And yes, behind every illustration, every poster, every graphical work, there's always some investigation involved.

I watched some documentaries, asked some friends, and did a small research about the the personality of the city, and about its emblematic points. When this was clear, I decided what I wanted to emphasize from all that, and I started drawing buildings, walls, skylines... 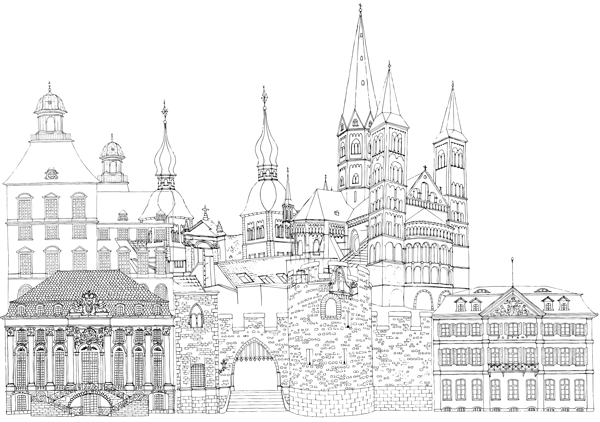 I drew various buildings, that I've just dropped together in this image above: the ancient city house, a piece of an ancient wall that is still standing, the ancient post office, the University, the Cathedral, and then a skyline.

Bonn is also the place of birth of the great Beethoven, and so I drew him as well (but this will come later ;) ).

Then, I turned the city into a particle detector.

I decided what structure I wanted to give the poster, where the text should be, where the image would be, and so on. After that I drew the basic structure of the detector I wanted to build, and I cut the various buildings into pieces, using my computer, and deformed them to fill in the detector structure I had created, trying to build Bonn as realistically as possible.

Once this was done I started painting the various parts, using the real colours the buildings have, and sometimes tuning them a bit so they would be more outstanding, more contrasted, more balanced...

When I had the broken Bonn ready, I drew the cables, the cable boxes, and the metallic structures that also conform a particle detector, and merged them with the rest of the city. When this was done, the detector was already built! 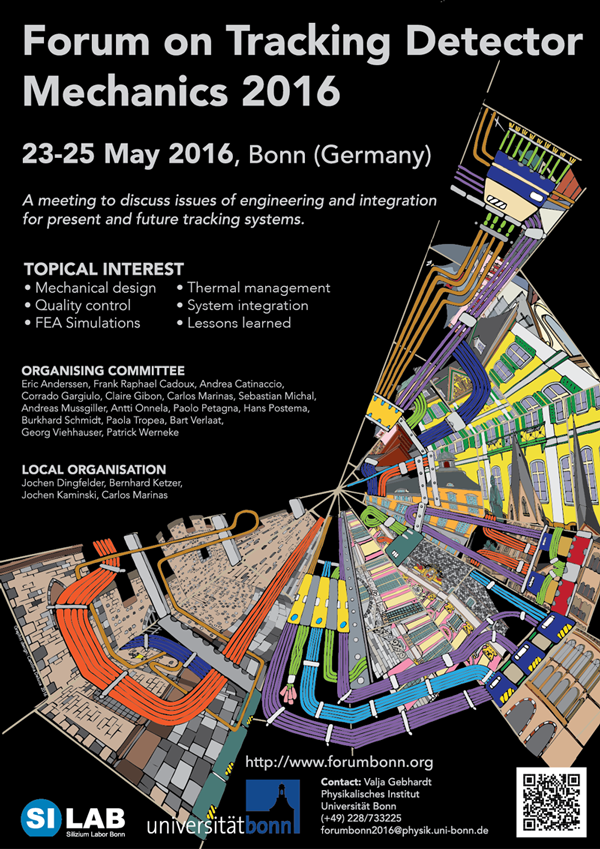 And now what I'd promised... a bit about Beethoven. Well, I invite you to look into the poster and see if you can find him. If you did find Wally when you were children, then you should be able to find Beethoven too!

Posted by Carolina Deluca at 2:14 PM No comments:

Another exercise we are doing with my 10 yr students, starting to learn composition and to reproduce proportions when drawing. They are now half way to finish the exercise, and the class is tomorrow, so I finished mine today.

One of the good things about me doing their exercises is that I get to use techniques I haven't long used. This one I did it with different graphite pencils and pencil colors. It was a bit since the last time I did a full drawing using only this technique!

And now another challenge: can you name all the utils in the drawing? 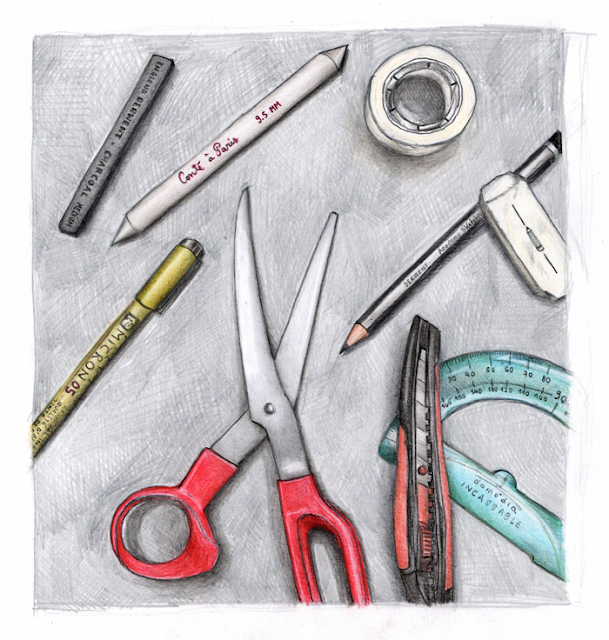 Posted by Carolina Deluca at 4:53 PM No comments:

Email ThisBlogThis!Share to TwitterShare to FacebookShare to Pinterest
Self-portrait

This is me. With my very serious face. I think usually I smile a bit more :)

I did this self-portrait as an exercice for the 10 yr old children who are in my drawing and painting classes. (I always do the exercices myself first to check them out, and make sure they are not too easy, too boring, too difficult).

This one was quite fun to make, and useful to start learning to draw faces, and to learn to identify zones of shadow to give the drawing some volume. So they did it with their own pictures a couple of weeks ago, and the result was pretty great. Kids learn so fast. 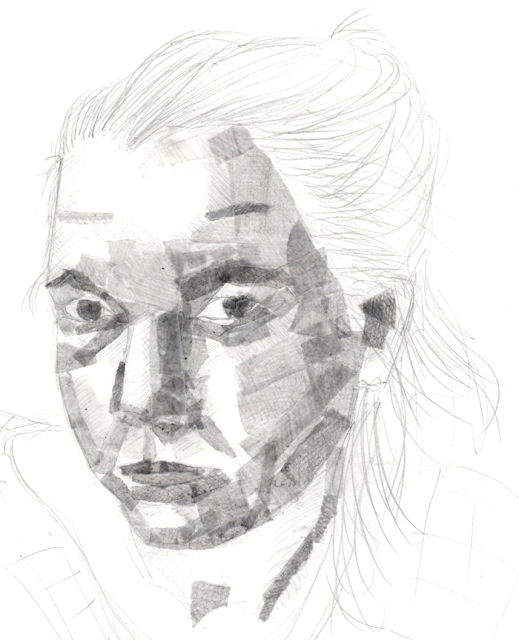 Posted by Carolina Deluca at 3:40 PM No comments:

Painting on a different canvas

This last month I've been very busy, so I haven't gone out to sketch, or made a drawing for myself. It is always like this, there are times of the year where everything is quiet and I can do more personal projects, and others were work keeps coming and coming. Usually after Christmas, with Spring and Summer at the end of the corner, it's when work starts coming in, everything at the same time :)

Lasts weeks I've been working non-stop on a longer project, but some days ago something different came up. It was a shorter project, and really different from what I usually do. I was so curious I managed to squeeze it in, and worked on it while waiting feedback on the other. That's time management!! ;)

First, I drew the structure of the tree. Really the structure, so later I could use branches, holes and intersections as reference points: 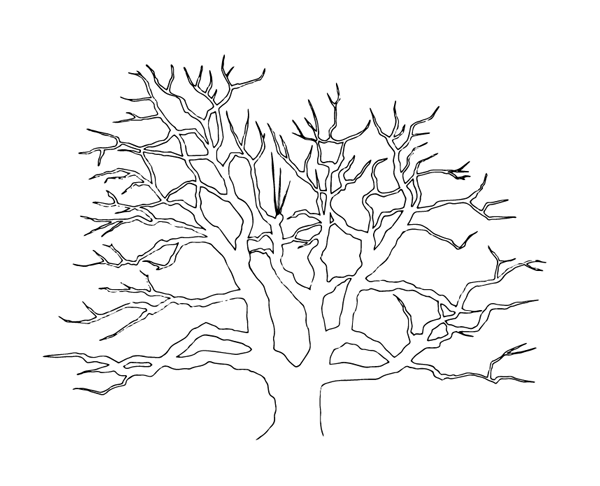 Then I started to paint it, with the color palette I'd been asked first, and later on introducing a few changes: 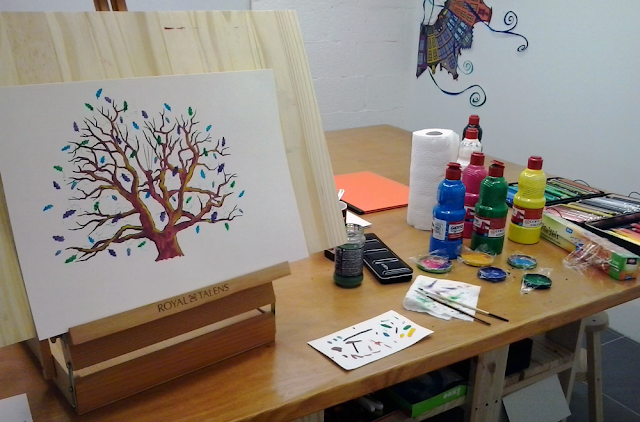 After some color tests, I was satisfied with the result: 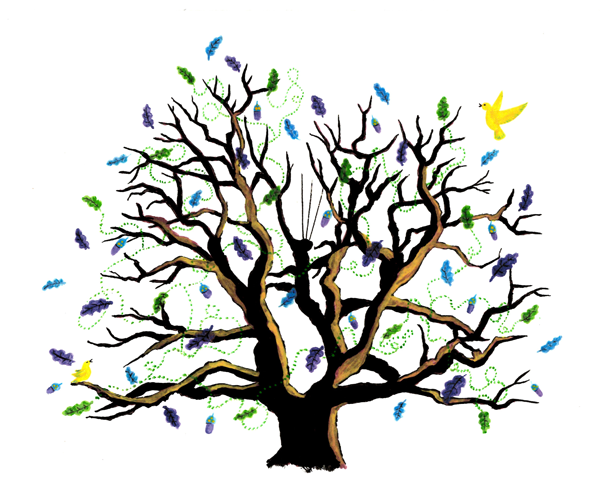 Then, I added some roots. A bit realistic, so they contrast with the branches, but with curls, so that they still talk with the part above 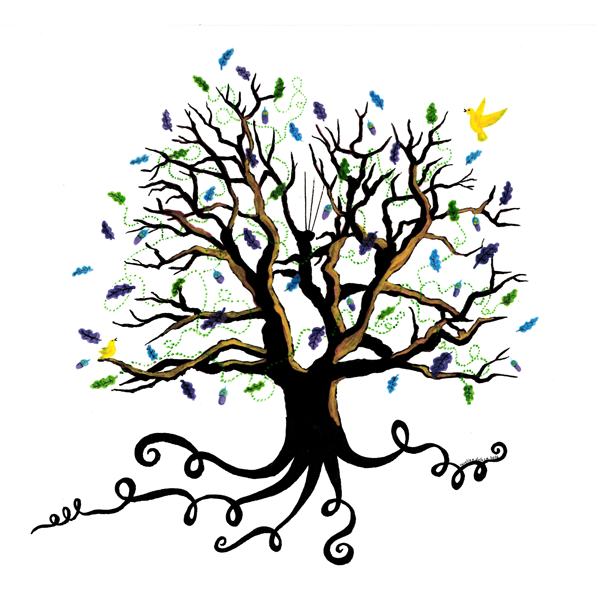 And well, today it was the day to make it in its final version, on its final canvas, not on paper, not on a wall, not on anything I usually do. Can you guess what is it? ;) 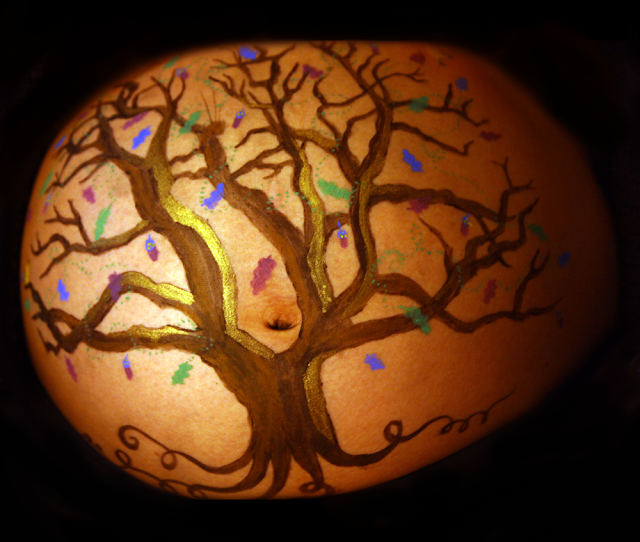 Posted by Carolina Deluca at 8:40 PM No comments: